You are at:Home»Reviews»Teardown: Dragino LoRa gateway

This week I made some progress with the LG01-S LoRa gateway from Dragino, and today I will offer you some insights regarding the hardware.

So, let’s take a look inside. Opening the case is pretty straightforward. Just remove the black rubber “feet” underneath the gateway, exposing the four screws the hold the case. Remove the screws. 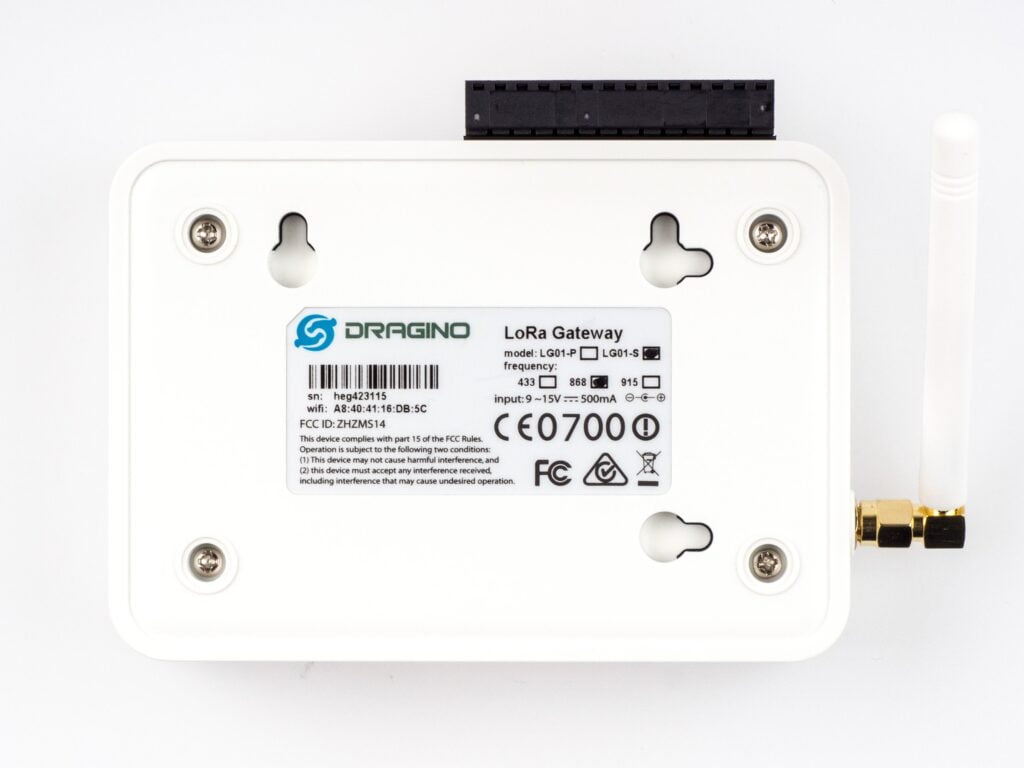 Then, remove the back side of the case. 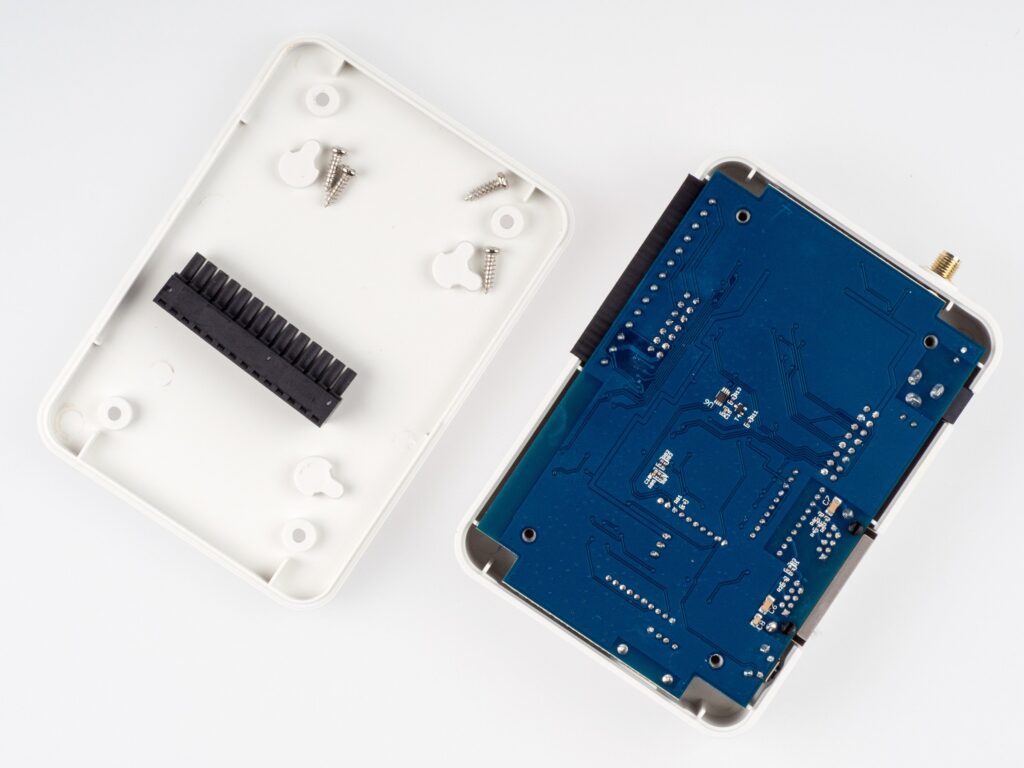 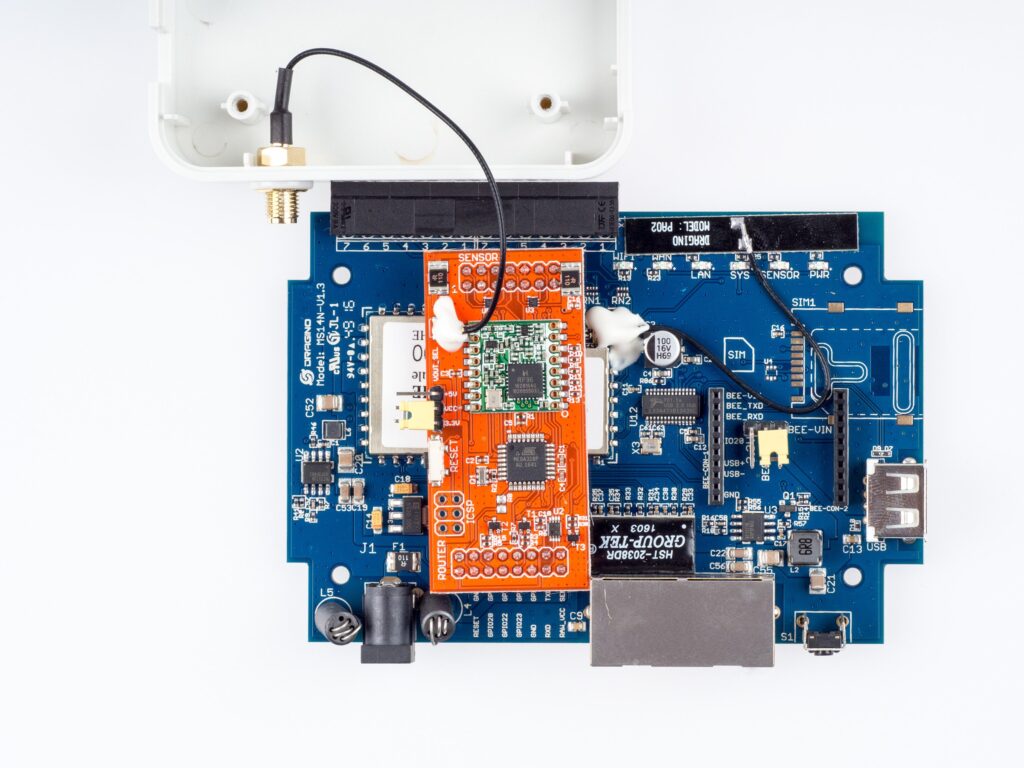 Once the case is removed, we can take a closer look at this thing. 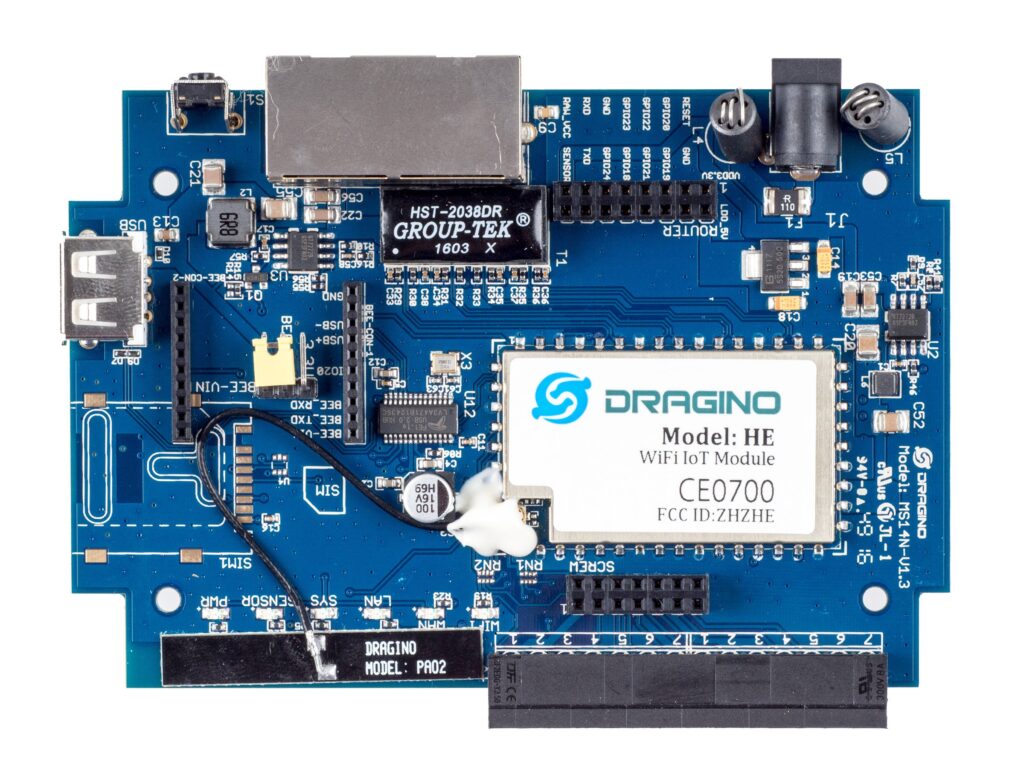 On the main board we find one Dragino HE WiFi IoT module, “a minimal system which installed with OpenWrt Linux system and support 150M 2.4G WiFi”. This module has an ATHEROS AR9331 chipset, 16Mb FLASH, 64Mb RAM, and plenty of I/Os. If you are familiar with the Arduino Yun, you’ll notice it’s the same Atheros chip used in the Yun – and it’s 100% compatible with existing Arduino Yun code.

This whole thing is quite similar with the Arduino Yun, except that the daughterboard uses ATMEGA328P instead of the ATMEGA32U4 you’ll find on the Yun. 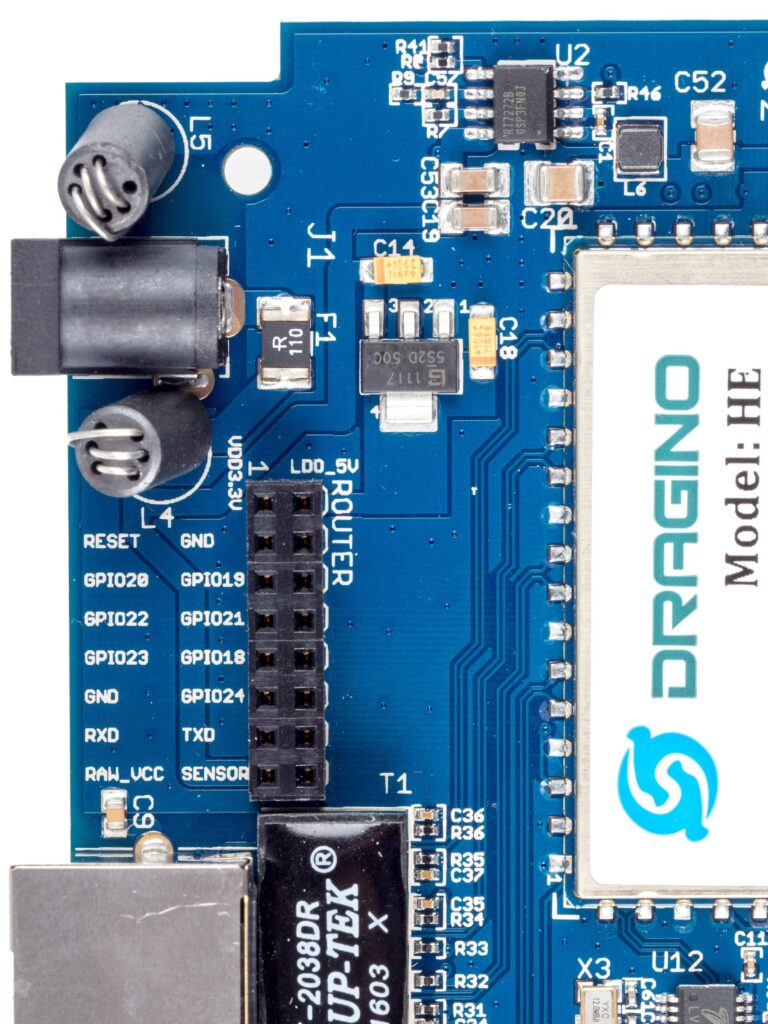 LoRa gateway – connector for daugher board

There are two connectors for the daughter board, one for communication with the Atheros chip, and another connector for the screw shield. 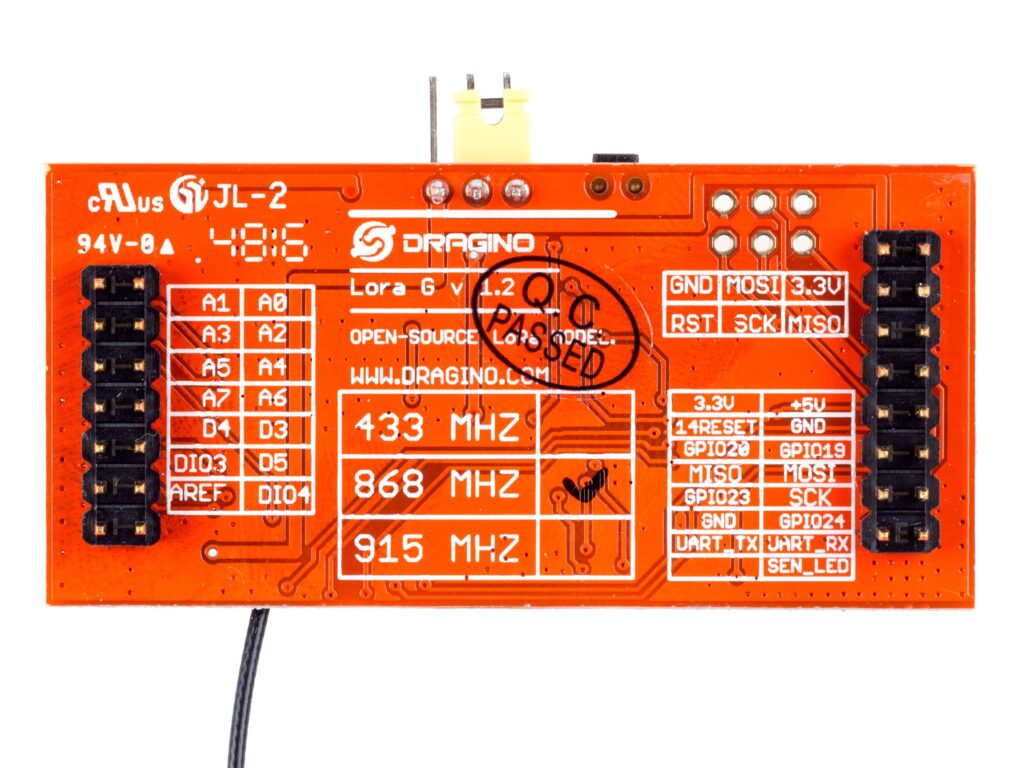 The meaning of the pins is clearly marked on the back of the daughtercard module. We notice the same connections as in the Yun, using SPI interface, UART, one reset line (GPIO18) and one handshake line (GPIO19).

We also find the pin correspondence for the screw connector. Here’s a little surprise, as the +, –, a and b markings have no meaning. One should refer to the pin diagram on the LG01-S page when using those pins. 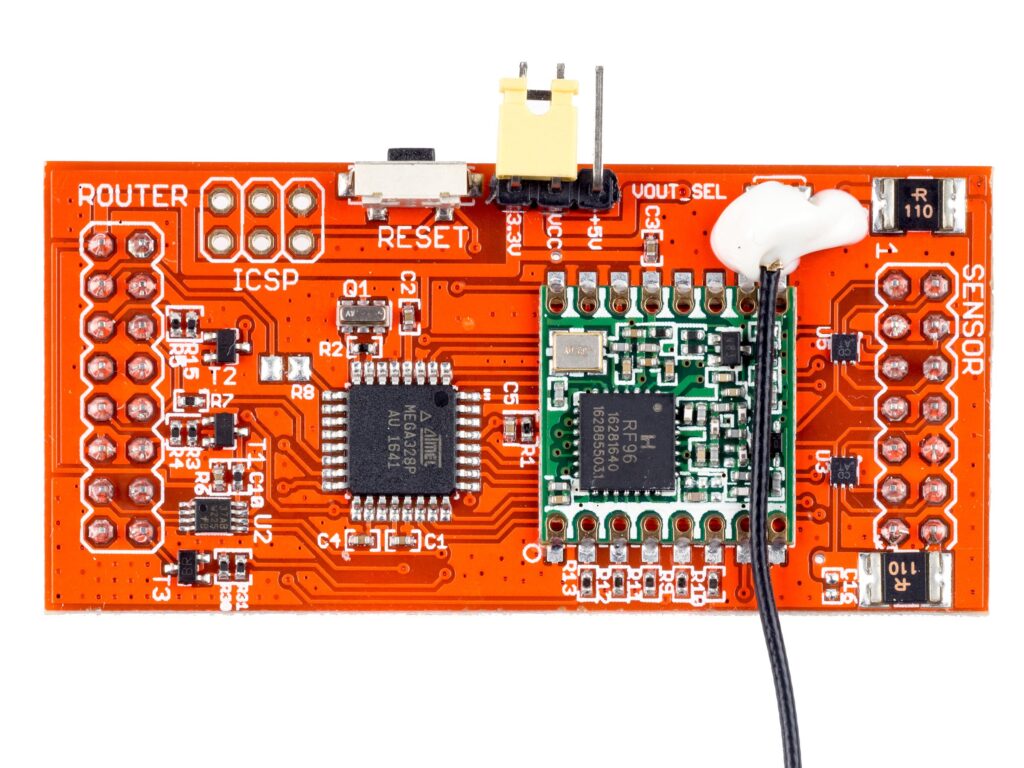 On the front side of the LoRa daughterboard, we also find a jumper marked Vout, which allows for 3.3V or 5V selection. There’s nothing in the user manual about this, so we’re on our own. For the given time I will leave it as it is, in the 3.3V position.

On the base board we will also find a socket for a ZigBee module. Again, there’s nothing in the manual about this. LoRa

The documentation for the MS14-N motherboard reveals that the ZigBee module uses the same RX and TX lines as the LoRa gateway. As such there’s no way to use both Zigbee and LoRa at the same time. 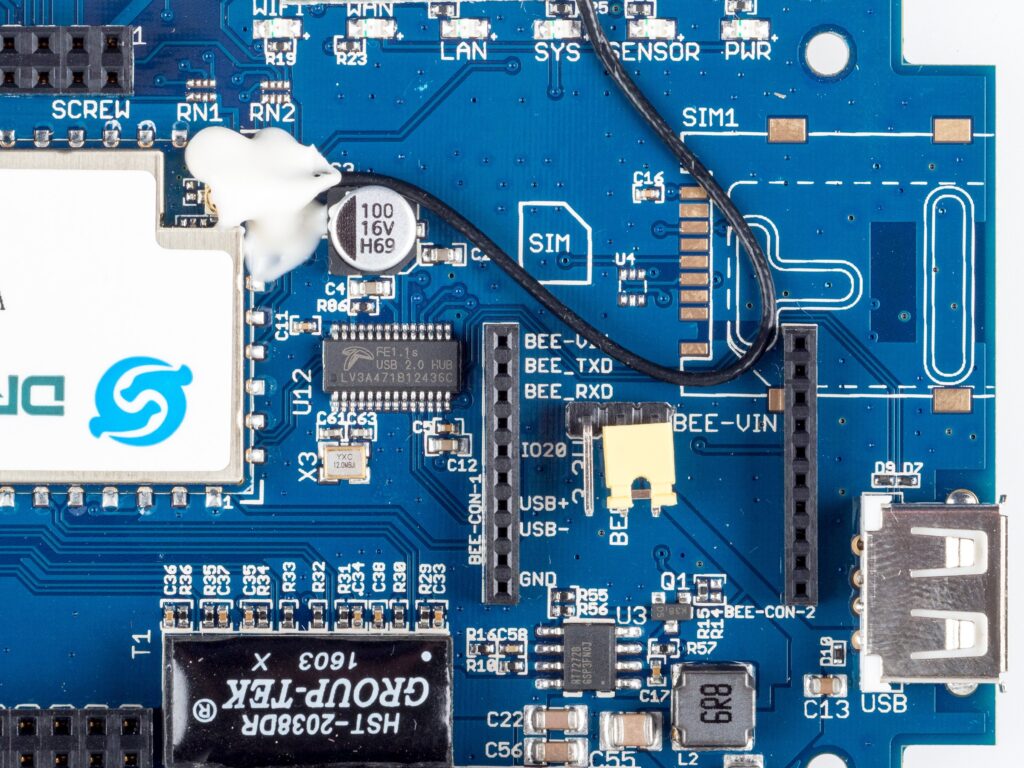 As a short conclusion, we have here a derivative of the Arduino YUN, in which the ATMEGS32U4 is replaced by an ATMEGA328P, and with an added LoRa module. The exact LoRa module depends on the chosen frequency band.

As for the software, the LG01-S gateway can be programmed in Arduino IDE, just like any other Arduino Yun. The only thing to care of is to properly install the board definitions. In Arduino IDE, go to Preferences – Additional Boards Manager URLs and add the following line:

Then, in board manager, install the Dragino Yun boards. Choose Arduino Uno Yun as your board. That’s all. Everything else is just like working with the Yun.

Regarding the LoRa side, the LG-01-S uses the Radiohead library, which is released under GPL v2 license. One should take care of proper licensing when developing commercial applications. You will have to download the library by following this link.

The LG01-S is by far the cheapest LoRa gateway at this moment. Even with shipping costs, VAT and everything else I was still able to get this under 100$.

Being based on open-source software and open-source hardware, this LoRa gateway can be modified with ease. I have a feeling that I will see this product in many interesting projects.

Future work? Connecting to https://thingspeak.com/, and developing my first LoRa node. More about this in the next few days.