Since the release of the first Arduino Uno board, a plethora of clones and derivatives has flooded the market. Some of those derivatives bring nice enhancements and sometimes perform better than the original Arduino Uno.

Such is the case of the NerO-SP1 board, manufactured by Bridgetek, featuring a switching mode power supply to provide 5V power, instead of the usual linear regulator found in the vast majority of Arduino boards. Still, a linear regulator is used to provide 3.3V power.

Another difference is the use of an FT232RL chip instead of the ATMEGA8 we find on the official Arduino boards. The board is still detected as an Arduino Uno inside Arduino IDE, but the interesting thing is that the FT232RL goes into a low power mode when the USB cable is not connected.

The board comes in three separate flavors: the NerO-SP1 comes with the usual header connector we find on any Arduino board. The NerO-LP1 comes with long pins, like those used by Arduino shields. It allows for an easy mating with the CleO35A TFT display. The Cleo35A display comes on the back side, with the Arduino side free for any shield we might wish to use. Finally, the NerO-NP1 comes without header pins.

Combined with the advantages of the better power supply, one should expect a better performance of the NerO boards when speaking about power consumption. But how much improvement we should expect? The simplest way to answer this question is to compare the current draw of the NerO board against some of the most used Arduino and Arduino-compatible boards.

The results are as follows:

In full load, the current draw is less than half of a ubiquitous Arduino Uno, with the current draw decreasing as the input voltage goes higher. This is exactly what I would expect, the efficiency of a switching mode power supply pays off.

Things are way different when the microcontroller is in SLEEP mode. The NerO takes less than one fifth of the current needed to power the Arduino Uno.

Comparing against other Arduino compatible boards

In the charts below, you can see how the NerO-SP1 compares against other Arduino boards.

The first test is for an input voltage of 7V; the minimum recommended for an Arduino board to run. One can see that in normal mode the NerO board has a power draw compared to an Arduino Pro – very good indeed, considering that the NerO has the onboard FTDI chip and the 3.3V voltage regulator. However, in SLEEP mode the performance of the Arduino Pro is difficult to match.

Raising the voltage at 9V shows a similar picture, with the NerO taking a bit less current than the Arduino Pro in normal mode, but with a higher current consumption in SLEEP mode.

At 12V the NerO takes way less power in normal mode, but in SLEEP mode the Arduino Pro is still the big winner.

Finally, at 18V. The Arduino Pro is missing from this chart, as 18V is too much for it. The NerO board takes the leading position, with the lowest power consumption as compared to all other boards in this test. 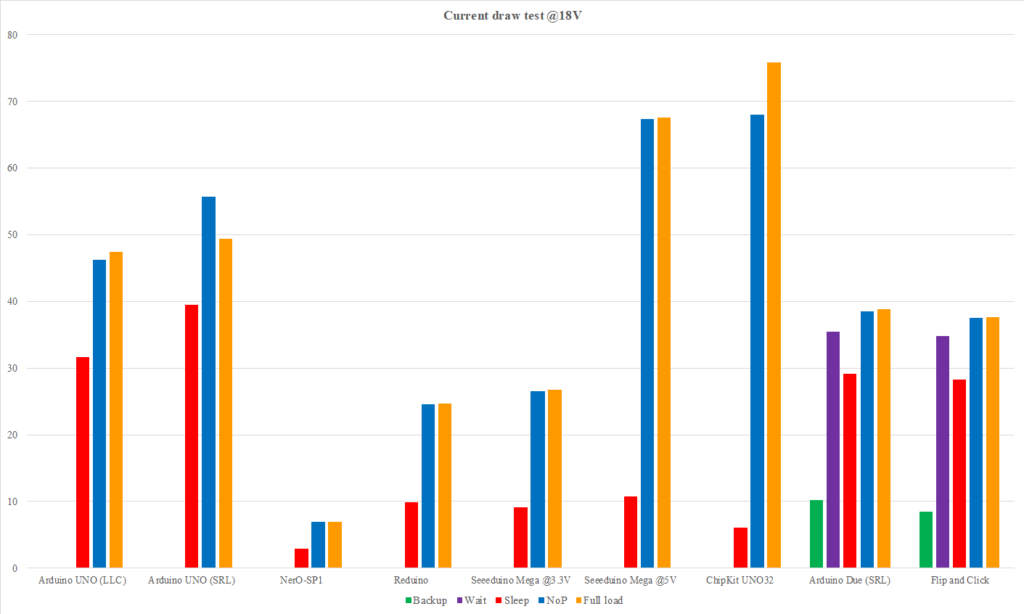 Except for the Arduino Pro, this is by far the most power efficient Arduino clone I have. And it comes with a price tag that’s very close to what I pay for an genuine Arduino Uno.

However, the Arduino Pro is a stripped-down board, with a smaller form factor, no 3.3V voltage regulator and with no onboard programmer.

Considering these differences, I’m impressed by the performance of the NerO. I would choose it anytime over an Arduino Uno if I had to run a project on battery power.

Google Cloud IoT Core is being retired on August 16, 2023