I recently bought a new soldering iron, a Multicomp Pro from Farnell. It’s an all-in-one temperature controlled soldering iron, which I plan to use for fieldwork and for some simple projects that require soldering, as an alternative to a bulkier soldering station.

You might be puzzled by the Multicomp Pro name. It’s a relatively new brand for Farnell’s private collection of affordable components, tools, and test equipment under the brand Multicomp Pro.

Farnell, the Development Distributor, has launched a new collection of affordable components, tools and test equipment under its new brand, Multicomp Pro. This collection brings the very best products from Multicomp, Duratool, Tenma, Pro-Power, Pro-Elec and Pro-Signal under one brand, making it easier for design engineers, technicians and production facilities to identify high value alternatives, whilst assuring production-grade quality they can rely on. [link]

There is also a 150W version. It’s too powerful for me, but it’s worth mentioning,

There’s a small soldering stand included, made from sheet metal. It’s good for fieldwork as it doesn’t take much space in the tool bag, but for regular lab work, it’s better to buy a cheap soldering iron stand.

There is a decent assortment of twelve various soldering tips. All soldering tips are quite massive, and I’ve noticed they have quite a big thermal inertia, especially when heating the soldering iron from a cold state. The display will quickly indicate reaching the set temperature, but you will have to wait a minute or so before the soldering tip reaches that temperature.

Using the soldering iron is quite simple, no big fuss. Two buttons to adjust the temperature and one menu button. A blue LED inside the MENU button indicates the heating status. The LCD is quite small and is not backlit, which sometimes makes reading the temperature a bit harder. The soldering iron goes to sleep after 10 minutes of inactivity and shuts down after 20 minutes.

Overall, a nice product, which has found a permanent place in my toolbox. It can also be an alternative to a soldering station, with a lower footprint, which can be desirable if your working space is not that generous. 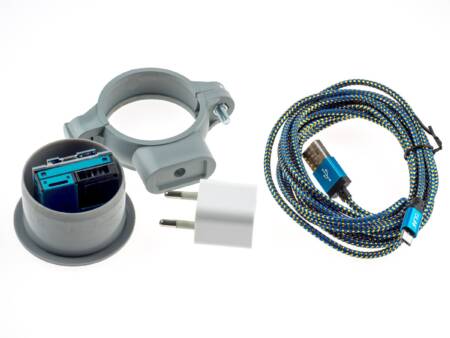