Why haven’t I used it? Because this board has more flaws than advantages, and it has a very limited compatibility with existing Arduino shields.

However, with the new 8-bit PIC microcontroller that has PPS (Peripheral Pin Select) some of the issues of the Amicus18 board can be overcome, so upgrading to a PIC16F18855 makes sense. So, what do we gain from upgrading? We will see.

First, a quick look at the original Amicus 18 board: 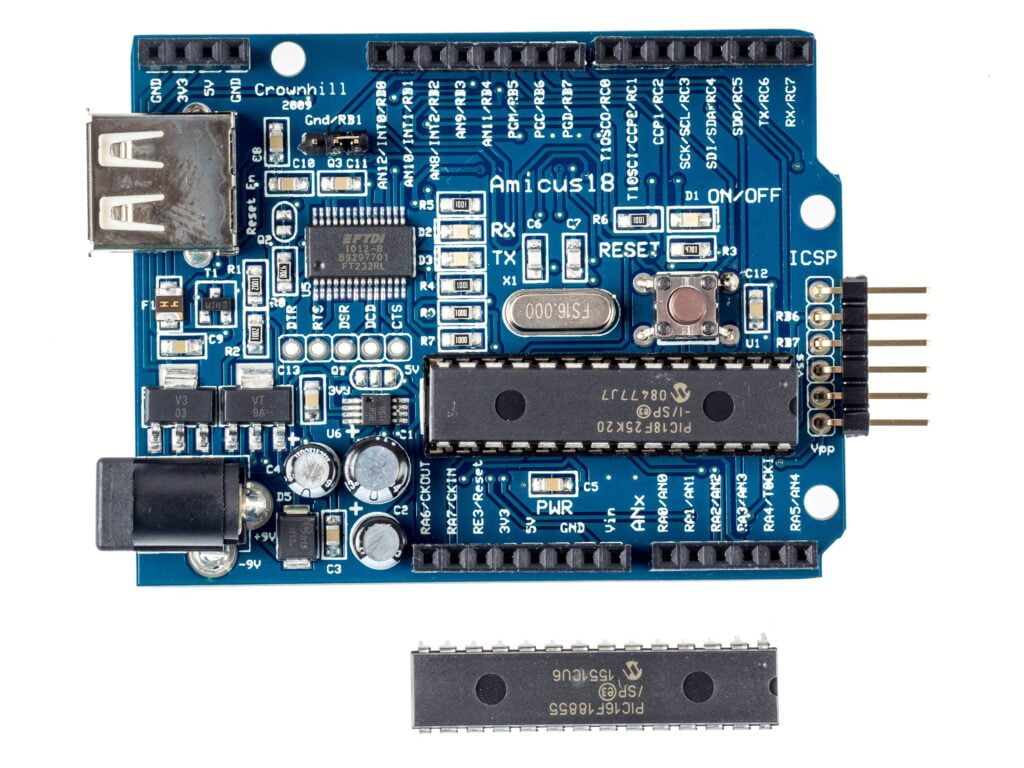 The board comes initially with a PIC18F25K20 with 32kb FLASH, 1536 bytes SRAM and 256 bytes EEPROM, The clock source is an external 16MHz crystal. The microcontroller comes preprogrammed with a UART bootloader. Communication with the PC is achieved via USB, using one FT232RL USB-UART bridge.

Here we notice one of the major flaws of this board: the USB connector is of type A, same as the USB host. A special USB-A to USB-A cable must be used, and that cable is hard to find, and sometimes can cost two or three times more than a regular USB cable.

I have mentioned above the poor compatibility with USB shields. Let’s compare the pinout of the Amicus18 board and that of an Arduino Uno. 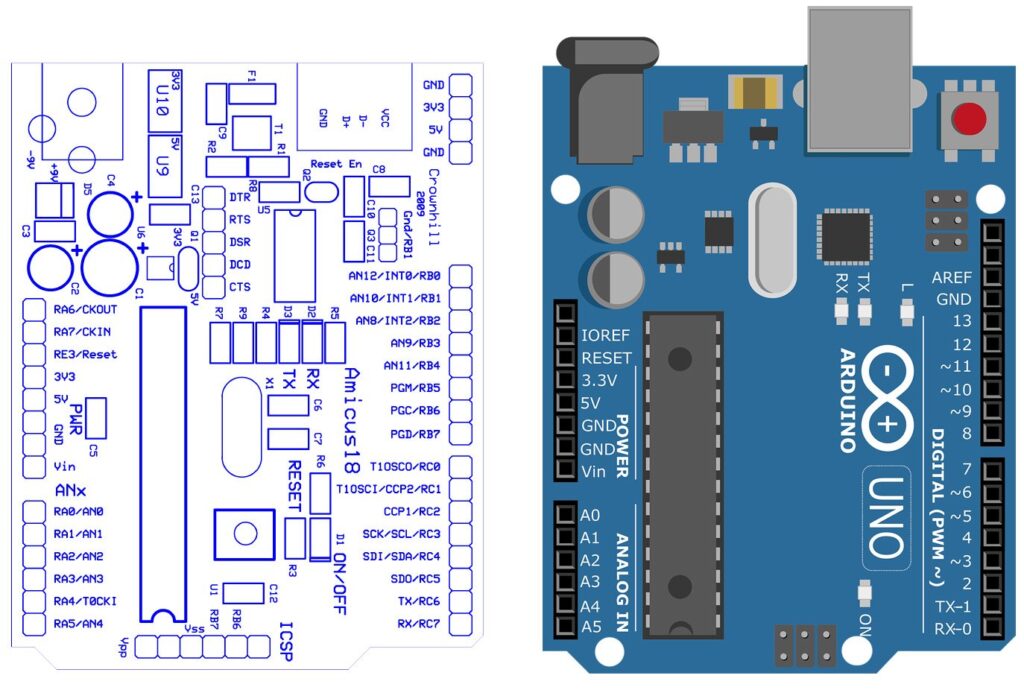 The first thing we notice is that the makers of the Amicus18 have assigned the pins from each port in sequential order, without paying much attention to the layout of the Arduino Uno boards. While there’s a match for A/D pins and UART pins, SPI, I2C and PWM lines are in the wrong positions.

On Arduino Uno, pins A4 and A5 are also used for I2C communication. The PIC18F25K20 uses pins RC3 and RC4 for I2C, which will put the I2C lines on pins 2 and 3 of an Arduino Uno. Any shield that uses I2C communication will require some extensive hardware changes to work with the Amicus 18.

Same happens with shields using SPI. On the Uno, pins 11, 12, and 13 are used for SPI communication (some shields rely on using the pins from the ICSP programming connector). Amicus18 uses pins 3,4 and 5 for SPI.

The ATMEGA328P has six PWM pins, corresponding to pins 3, 5, 6, 9, 10 and 11 of the Arduino Uno board. Most 8-bit PIC microcontroller have only two PWM pins. Our PIC18F25K20 can be configured to use pins RC1 and RC2 as PWM. Thus we have a limited compatibility with some Arduino shields.

Overall, many disadvantages and limitations, and the use of the Amicus18 board with Arduino shields is severely restricted.

As the PIC16F18855 can work with up to 5.5V power supply, it makes sense to modify the Amicus18 board to operate at 5V, same as the Arduino Uno. This is done by cutting a thin PCB trace and installing one solder bridge, just as in the pictures below:

Amicus18: configured to work at 5V

That PCB trace is quite difficult to cut, and you can notice that I’ve managed to damage a nearby trace. It’s a quick fix, but it should stay as a warning for those who will attempt to switch to 5V.

Unless one plans to install a UART bootloader, it pays off to cut also the trace at the pad Q2. This will disconnect the internal reset for the microcontroller from the USB-UART chip. Thus, no unwanted resets when working with the serial communication. Programming can be done simply using one PICkit3 or any similar programmer.

Now comes the fun part: with the use of a microcontroller with Peripheral Pin Select help increase compatibility with Arduino shields?

Below is a screen capture from MCC (Microchip configurator) showing the possible choices for I2C and SPI pins.

Port A pins can’t be used for I2C communication, so one can’t use shields that need I2C communication with the Amicus18, so there’s no improvement here. As a side note, chipKIT boards use a pair of jumpers to overcome this issue, allowing to select either I2C or analog functions for A4 and A5.

On the other hand, we can reroute SPI pins to match the layout of the Arduino Uno, so we might be able to use some SPI-based shields. The issue here is that many (new) shields have started to use the pins from the ICSP connector, and that connector is missing on the Amicus 18.

Once again,  a screen capture from MCC (Microchip configurator) showing the possible choices for PWM pins.

Bad luck here: we can’t use the pins from PORTB as PWM pins. We can, however, use any of the pins from PORTC. Thus, only shields that use Arduino pins 3, 5 and 6 will work. Ardumoto won’t work unless we make some minor hardware changes. Zumo robot shield will work, also with some minor hardware changes. Overall, much better than the original PIC18F125K20, but still far from achieving full Arduino Uno compatibility.

Changing the PIC18F25K20 to a much newer PIC18F18855 brings some enhancement and improves the compatibility between the Amicus18 and Arduino Uno boards. Still, we’re far from having an 8-bit PIC development board in Arduino Uno form factor.

However, there’s much to learn from this board, and maybe, someday, someone will design a better PIC-based Arduino counterpart. Here’s what I would do:

Until then, the Amicus 18 is the closest thing to a PIC-based Arduino compatible we can get.

error:
We use cookies to ensure that we give you the best experience on our website. If you continue to use this site we will assume that you are happy with it.OkNoPrivacy policy
You can revoke your consent any time using the Revoke consent button.Revoke cookies